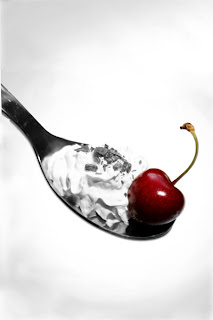 The other day, my boyfriend’s roommate brought over “Sundae-Making-Supplies”: whipped cream, cherries, sprinkles, and some peanut butter cup ice cream. As you all know, I freaking hate peanut butter, especially peanut butter cups. Still, I can never turn down an opportunity to snack on sweetness, so I filled a small wine glass with whipped cream and topped it with rainbow sprinkles and like five cherries.

“Whipped cream sundae!” I announced to no one in particular. “Reminds me of my mommy!”

“Why’s that?” my boyfriend asked, looking up from his mount of fudge-swirled-peanut buttery ice cream sludge.

“When I was a kid, Anyu would always come home and say, ‘I haf a surprise for you!’ and swirl a ton of whipped cream into a crystal glass. It always made me feel fancy, so that’s how I like it now.”

“Well, this one isn’t exactly the same. This is a wine glass, and the ones we had were stolen, fake crystal glasses from the Howard Johnson where Nagymama worked. And we never had maraschino cherries, Anyu was afraid it would stain my clothes. Oh, and I could never put the ‘jimmie-type’ sprinkles on it like this. She was always afraid that long sprinkles would get lodged in my throat and I would die, but the sprinkle ‘dots’ were okay. But this still makes me nostalgic…”

“-And there’s the trauma!” he said, laughing.

“What? No! No trauma! It’s just whipped cream!”

“You know, Steph, I think this is why you’re so stressed out all the time.”